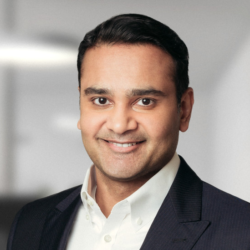 Mr. Singh is a VP in the origination team at Brevet Capital and oversees all IP related investments at the firm.

He began his career at Dassault Systems working on engineering design and simulation for Boeing aircraft and Honda Formula 1 cars. In 2008 he joined Silar Advisors’ deal structuring team where he worked on notable transactions including the $13 billion acquisition of IndyMac from FDIC in the then largest public-private investment partnership (PPIP).

In 2012, Mr. Singh co-founded TSG Entertainment, which is now one of the largest independent film financing entities in the world with over $2 billion in content.

Mr. Singh was most recently at HomeBridge Financial Services, Inc., one of the largest independent mortgage lenders in the country with over $15 billion in annual originations. At HomeBridge, he worked directly with the CEO and President on various capital markets transactions totaling over $20 billion.

Mr. Singh earned his MBA from Foster School of Business at UW in Seattle as an Evert McCabe and Orin Smith endowed Fellow and received his undergraduate and masters degree in Industrial Chemistry from IIT Kharagpur, India. He is a CFA Charterholder and holds a Data Science Specialization Certificate from Johns Hopkins University.